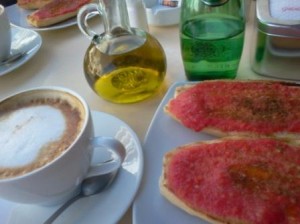 Having grown up in northern England as a child, breakfasts were cereals, muesli, toast and jam and of course the good old English fry up. I would never have dreamt that, one day, one of my favourite breakfasts would be oil and tomatoes on toast!

In the Malaga province, pan con tomate y aceite can be ordered in any Spanish bar or cafe and is probably the most popular Spanish breakfast. Each establishment has it’s own way of presenting the dish but the result is “usually” always delicious.

Here is a very easy Spanish recipe for making your own pan con tomate y aceite:

In a blender, add: ripe and juicy tomaotes (the bigger and riper the better, with middle and seeds removed), a dribble of olive oil and a sprinke of salt and black pepper.

Blend until you have a relatively smooth consistency.

Pour the mixture into a pot and put in the fridge until chilled.

Serve on your preferred type of bread.

NOTE: Some recipes will tell you to remove the tomatoes skin but we like the texture when leaving the skin on  … and it is a lot quicker 😉

See, we told you it was a very easy Spanish recipe! As with most Spanish cuisine, the secret lies in the quality of the ingredients!  ¡Bon provecho!