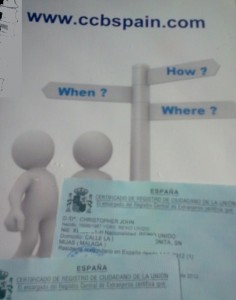 A few months ago we informed you about the changes in the Residency in Spain application procedure, in our post entitled ¿Qué pasa España?

Our closing phrase was “Let´s see what happens next …”

So, guess what happened next?

At this point, please remember that I earn my living by helping people sort through the maze of Spanish red tape and bureaucracy via our business www.ccbspain.com. Many an hour is spent battling with authorities on behalf of my wonderful clients. To people’s utter astonishment, I openly admit to loving the challenge and am greatly rewarded by my client´s satisfaction.

Last week,  I visited the police station in Fuengirola, with two people who had just moved over to Spain and were due to start work ,and my husband (Yes… my own husband!) who needed to renew his old style residency card.

We followed the application procedure for the new residencia as detailed in our CCB Spain post Spanish Residency Update and within an hour and a half, which included paying the taxes at the bank (and that involved having to try 3 banks in the vecinity!) and having a coffee,  we walked out with two shiny new Spanish Residency Cards.

However, much to our frustration, we had not been able to renew my husband´s residency! Why?  Probably because the immigration officer on the desk was having a bad day!!! That is how I felt as we walked out of the police station having had to make a new appointment for a completely separate residency application … for somebody who has been a legal resident in Spain for almost 20 years, who owns a house here, whose children are in state school here and who pays a lot of tax here … rant over!

Our new appointment was for Monday 24th September, I say “was” because we were unable to get an appointment at Social Security, for another copy of a piddley piece of paper to show that his health insurance is covered by my social security payments, until Tuesday 25th!!!

Despite my ranting, we have to admit to have just not got round to renewing my husband’s residency card as we did not need it (That´s the confession, by the way.)  As a result, we have to start the application procedure all over again as detailed in our article Residency in Spain Renewal Update , we want others to learn from our mistakes and hopefully save them headaches too!

To top it all, his passport runs out in October and we are going back to the UK for Christmas this year so we will now have to renew his passport and then delay the residency renewal until we have the new passport … and how blumin’ expensive are passport renewals these days!

So, the passport renewal applications are ready to be sent off. We will go to the social security office next week and then one day , maybe, in the not too distant future we will make another application to renew the residency … let´s hope the piddley paper from the Social Security office hasn’t expired by then … and people wonder why Spanish paperwork is such a nightmare!

Can you be bothered???  I´m sure many expats can not!

If you would like more details about the new requirements for applying for residency in Spain, please read our CCB Spain post  HERE.