A to Z Spain: Things we think you should know about Spain… 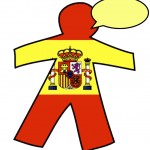 Welcome to the second part of our very first A to Z Spain. In future posts, we will focus on more specific topics but for this first A to Z Spain we would like to share some general insights into the country we have chosen to make our home.

We hope to provide you with some interesting facts, dispel a few myths and touch on a few delicate issues.

N is for Natural (National) Parks :

In Spain, a natural park is a natural space protected for its biology, geology, or landscape, with ecological, aesthetic, educational, or scientific value whose preservation merits preferential attention on the part of public administration. Natural parks focus their attention on the conservation and maintenance of flora, fauna, and terrain. Natural parks may be maritime or terrestrial and can be in the mountains, along the coasts, in the desert, or any other geographically defined space.

The largest protected space in Spain, and also its largest natural park, is the Sierras de Cazorla, Segura y Las Villas Natural Park in the province of Jaén. 9.1% of the surface area of Spain is protected, including 42 % of the Canary Islands, 30.5 % of Andalusia, and 21.51 % of Catalonia, with lesser percentages in the other autonomous communities. Andalusia has 36 % of the total protected areas in the country. For a full list of Spanish Natural Parks See here. 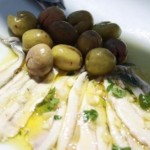 O is for Olives and Olive Oil:

Olive groves line many a road in the Malaga province. Unlike the bitter olives tasted in some other countries, Spanish olives, particularly the manzanilla variety are juicy and even sweet. Iberian olives are usually cured and eaten, often after being pitted, stuffed (with pickled pimento, anchovies, or other fillings) and packed in brine in jars or tins. And, of course, almost everything is cooked in olive oil!

There are around 850 million olive trees on earth, covering more than 10 million hectares of land and 2,513,400 of these hectares are spread across Spain. Growing increasingly popular in recent years with food lovers around the globe, over 18 million tonnes of olives are produced each year, with Spain accounting for 30% of the world’s total output.

The main olive yielding region of Spain is Andalusia in the south, which produces 77% of the total olives grown in the country.

Central to Spain’s Mediterranean way of life, the olive is so much more than just a simple fruit.  Originally thought to symbolise peace and wisdom, Spain’s olives are steeped in history and are today as highly prized as they were centuries ago. Read more Here! 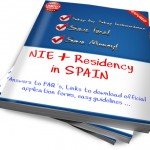 P is for Paperwork:

Paperwork and Bureaucracy are the main cause of headaches for many people in Spain. Daily tasks that can often be easily resolved in your home country, by a quick telephone call or a visit to the local office, can appear a lot more complicated in Spain. Sometimes even speaking the local language fluently does not make the battle of fighting through the Spanish red tape of bureaucracy any easier. You can read our experiences and advice in the posts HERE

Q is for Queueing:

Basically, queueing is a rare experience in Spain. Should you walk into a bank where several people are waiting you may hear somebody ask “¿Quien es el ultimo?” , they simply ask who is the last person waiting and they know that they wait to be served

Basically, queueing is a rare experience in Spain. Should you walk into a bank where several people are waiting you may hear somebody ask “¿Quien es el ultimo?” , they simply ask who is the last person waiting and they know that they wait to be served after them. Oh, and if you ever have the chance to “take a number”, when waiting at a seemingly empty counter, make sure you do so. It is not unusual for people to turn up and claim their place whenever their number has passed!

R is for Religion:

Spain is a Catholic country. In school, all children have religion as an optional subject. Semana Santa (Easter) is Spain’s most celebrated religious holiday, even more so than Christmas! Even after so many years living in Spain, we are yet to fully understand the story behind this strangely religious festival, but with the aid of several colleagues we hope to produce an informative post for you in the near future.

S is for Sherry:

Sherry is one of the oldest wines in the world. On 26 May 1933, it became the first recognised D.O. in Spain. From Southern Andalucía, Sherry is made and aged within a triangle formed by the 3 main Sherry towns of El Puerto de Santa Maria, Sanlúcar de Barrameda and Jerez. It is the only place in the world where Sherry can come from, as Champagne can only come from the district in and around Champagne. Sherry takes its name from Sherrish, the name given to Jerez by the Moors when they lived there for 600years. Sherry is F.A.B. Fortified- by a grape spirit. Aged – in Bodegas using a system called Solera y Criadera. Blended- Sherry is rarely vintaged, it is a blend of different vintages thus allowing for consistency year after year.

Sherry is a generic term under which there are 8 types: Fino, Manzanilla, Amontillado, Oloroso, Palo Cortado, Cream, Moscatel & Pedro Ximenez (PX) All types of sherry have several things in common  – they are all made from green grapes – Palomino, Moscatel & Pedro Ximenez, the latter always being sun-dried. The main differences are the level of fortification and the exposure to oxygen.

Sherry is very definitely a food wine and if you match it with the perfect dish, it can give you a food and wine matching experience that you will never forget. To learn more, check out the amazing Annie B’s Spanish Kitchen. 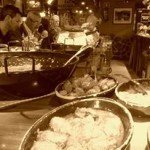 T is for Tapas:

Be warned, tapas are not always free!  Tapas are a wonderful Spanish tradition and can be found in many bars around Spain. Tapas are small plates of food that are a great way to test the local specialities. It is thought that the name came from “tapar”, “to cover”, from back in the days when a slice of bread was placed over a glass of beer or wine, to stop flies or dust getting in.

If you are visiting a new part of Spain, taking part in an organised Tapas Tour, organised by a local expert, is a great way to taste the local specialities! We recommend Lauren in Madrid, Shawn in Seville and Victor in Malaga.

U is for Uvas (the Spanish word for Grapes):

And what comes from grapes? Wine of course! Spain is one of the greatest producers of wine in the world: in first place, in terms of planted surface area, the 3rd biggest producer (giving a larger yield than that of France and Italy) and 2nd global exporter when it comes to volume, third if you take into account value. In my totally biased opinion, the best Spanish red wine is from the Ribera del Duero region and Albariño / Rias Baixas produce the best Spanish white wines. To read more about the incredible amount of  varieties of Spanish grapes, look here .

V is for Ventas:

Ventas are fabulous restaurants, usually located in more rural areas of Spain. The food is always homemade, tasty and great value for money.  Look out for them on the larger country roads between towns and villages. Visiting a venta is an excellent way to see traditional fare and way of life. They have a friendly, family atmosphere. The simplest ones consist of a bar and tables in one room. The larger ones have a separate dining room away from the noise of the bar and perhaps an outdoor terrace. In the summertime, the large rooms and shaded terraces are nice and cool and in the winter, it is not uncommon to have blazing open fire. Highly recommended! 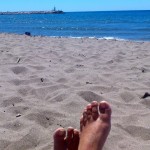 W is for Weather:

It does rain in Spain and not just on the plane! It is not always hot and sunny! Spain does enjoy a decent amount of rainfall (particularly in Grazalema the wettest place in Spain, surprisingly located in the South of the mainland) and many places have had snow this year too! However, Spain does have a predominantly warm Mediterranean climate, with dry summers and winters with balanced temperatures. You can enjoy more than 3,000 hours of sunshine per year. It is no surprise, then, that Spain is one of the warmest parts of Europe.

X is not always for X:

How do we pronounce the letter “X” in Spanish? Basically, due to regional language variations, there aren’t any rules that hold true throughout the Spanish-speaking world. In general, however, when between vowels (as in exactamente) the Spanish X  is pronounced basically like the English “ks” sound. When it comes before another consonant (as in expedición), it has the “s” sound in some areas but the soft “ks” sound in others. In some areas, the letter’s pronunciation before a consonant varies from word to word. The only way to know for sure is to listen to someone speaking with the regional accent you wish to emulate.When a word begins with X (there aren’t many such words, and most are English cognates), it is usually given the “s” sound, not the “z” sound of English. Thus a word like xenofobia sounds the same as if it were spelled senofobia.

Oh and just in case you thought this was now clear, please note that a few words of Catalan, Basque or indigenous American origin the X is pronounced like the English “sh”.

Y is for Youth Unemployment:

At the time of writing this, there is an incredible amount of publicity about the current youth unemployment in Spain. Many a tabloid refers to the unemployed youth of Spain the “lost generation”. Without doubt, it is not a desirable situation but I think it needs to be put back into context. Unlike in many other EU countries, until last year, the average age of a Spaniard leaving the family home is believed to be 34 years old. Many young Spaniards work for family businesses and unfortunately, due to complicated employment laws, work full time jobs on very short, part time contracts. Without doubt, there has been a lot of activity “on the black”.

I do not think that I am alone in congratulating some of the younger Spanish generation of today who are literally getting off their butts and making moves to secure employment away from their home country. For some of these youngsters, the current “crisis” in Spain, is creating a world of opportunities. It is making them break the mould of the past and  taking action to secure themselves a better future.

Z is for Zzzzz, better known as the Spanish Siesta:

Yes, the Spanish siesta still exists in may places but not all! Some shops do close between 2pm and 5pm but not all. The idea of the siesta is that this is the hottest time of the day, and to be avoided whenever possible. It is advisable to find out which shops and businesses do close before planning your days out.

The slideshow below shows the main points in pictures, go and make yourself a cup (or a glass 😉 ) of something nice, sit back and enjoy …

A to Z About Spain from Lisa Sadleir
[wysija_form id=”4″]

So, there you have Part Two of our A to Z Spain: Things we think you should know about Spain…

We hope you found it interesting and would love to read your comments and insights.

To Read Part One (A to M) Click HERE 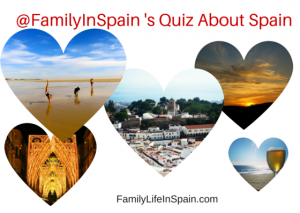