Where to live in Spain: Madrid v Valencia 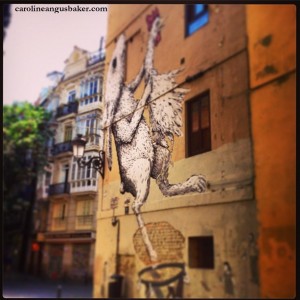 If you are thinking of moving to Spain and wondering where to live in Spain , it is always interesting to hear what other expats living in Spain have to say about areas they have lived in.

Today, Caroline gives us her thought on the beautiful cities of Madrid and Valencia…

From the stimulating and spontaneous Mediterranean coast, to the noble and austere heart of Spain, Valencia and Madrid have much to offer for both holiday-makers and those wanting to make Spain their home. While the luminous coast and the sagacious inland cities are different, they both have much to offer.

So often a cliché, but with at least 300 blue-sky days per year, your soul with thrive in the light and warmth of Valencia. Spain gets cold in winter, something often forgotten by outsiders, but while most of Spain shivers in the depths of winter, Valencia remains milder than its counterparts. Have no fear, skiing is not far away if you like to chill, but be prepared for 20-degree winter days, as well. When summer rolls around, I love to relax in the hot sunshine, or kick back on the beaches tantalisingly close to the city centre.

Valencia boasts a park to die for, nestled in a dried riverbed. Seven kilometres of both revelry and solace runs through the city like a vein of indulgence. It starts with the wondrous Bioparc zoo; the green belt weaves its way past lucky locals with sports fields, playgrounds, cafés, cycle lanes, paths to stroll along, ponds and fountains, and greenery all around. The park comes to rest gently near the sea, blessed with the magnificent Ciutat de les Arts i les Ciències, the City of Arts and Sciences complex, giving all day beauty and entertainment. Sitting under a tree for a picnic or watching a dolphin perform – the Turia has it all.

Don’t bother driving this amazingly compact city; you can walk from one side to another. From the beaches just north and south of the city centre, to the majestic old town, and everything in between, you will see it all in no time. Airport and train links can have you anywhere in hours. Smaller towns and the stunning Albufera Lake also beckon nearby, giving a whole new perspective on the Valencian region.

Valencia has an air of spontaneity and enjoyment. From the lavish and exciting Las Fallas festival to everyday activities, Valencia makes me feel young. Less concerned with an official identity compared to other cities, Valencia allows freedom and contentment. Whether I want to walk around wearing my best, or take it casual, I slot right in. When I first moved to Valencia, I had no idea about the Spanish lifestyle, but Valencia has no set rules. 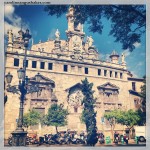 First settled by the Romans over 2000 years ago, the jewel of a city has been a prize ever since. The ruins of the first settlement remain; right alongside many more structures carefully crafted and adored over 1000 years or more. The Valencia Cathedral, the Gothic Torres de Serranos and Torres de Quart, La Sonja silk market, Mercado Central, Miguelete bell tower, Virgen de los Desamparados basilica, medieval churches and a host of art museums are just some of the sights to explore. Valencia’s commitment to ensuring its place as a beautiful eternal city rewards locals and visitors alike.

Valencian is an official language right alongside Spanish in the region. This variant of Catalan is taught in schools, to preserve the tradition.  Valencia city itself has its own unique variant, but if you only speak Spanish, that’s okay too. Increasingly, people in the city are speaking more English if you are truly stumped, a stark contrast to a decade ago. You won’t get authentic paella anywhere but Valencia, and you can swap the usual churros and chocolate for more local horchata and fartons if you want to immerse yourself more. Las Fallas, a truly Valencian fiesta, will make you feel at home as you learn to burn giant statues on every street corner to welcome in springtime.

Valencia is a top Spanish city but doesn’t boast the prices of its counterparts. Shopping provides both the larger national stores along with local varieties, and everything from the food to the properties won’t have the hefty price tag other European cities carry around. From the old town restored apartments to beachside or rural homes, your euro will go further. You can walk out of a restaurant after dinner, wondering you just accidentally ripped off the owners with the small bill; but you can also take on a Michelin star quality experience since Valencia provides all the choices.

Noise. One study showed that 40 percent of Valencians have poor hearing, and that wouldn’t surprise me. I have gotten more peace on Barcelona’s La Rambla than in an average Valencian street. If you live or stay in the old town, prepare to get no peace. One of my Valencian apartments was on the 30th floor, which blocked out some noise, but my neighbours were always there to shout conversations at each other at 2am. 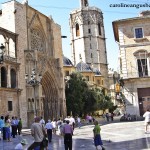 After moving from damp New Zealand to dry Valencia, I loved that I could hang out laundry at midnight and have it dry by morning – until the ever present Valencian dust lands on everything. The city is so often covered in a fine layer of yellow dust, giving the city a dirty look. However, when it rains, the city gleams again.

Valencia’s service industry needs a kick in the pants. Many cities could claim the same, but whether it’s the waiters, shop assistants, or the gas repair guy, the attitude can be a pain. Manners and patience go a long way, but still, expect to feel exasperated. Be direct, or you’ll never get a drink.

Go to bed at midnight, hoping for an early night because you have to have your face on live TV tomorrow and you don’t want bags under your eyes… BOOM! Some idiots are letting off enough fireworks outside my apartment to ignite a small nation outside. Why? Chances are some obscure fiesta is occurring. The party calendar is pretty full in Valencia, but between the noise, delays in getting official things completed and traffic blockages, it can become annoying. 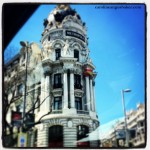 In one city, the different barrios have so much to offer in terms of lifestyle variety. The Salamanca and Retiro barrios have designer stores and architecture, beautiful parks and leans against the some of the greatest art museums of them all. Sol, the literal and spiritual heart of the old town brims with mystery on every little street. Lavapies is filled with both Spanish history and those moving coming to Madrid, giving a superb multi-cultural vibe. Gran Via provides the shopping, Huerta and Santa Ana are packed with bars and cafés, and Chueca has nightlife to die for. No matter your choice, there is a barrio for you and your budget.

You will never go hungry in Madrid. From the oldest restaurant in the world, to modern places churning out new ideas, I always feel spoiled for choice. No expertise is needed; simple wander the streets for delicious, traditional and imaginative offerings. All budgets are catered for, as well as all tastes. Even the tapas portions given out with each drink are generous.

Madrid was only a small town until 1561 when it was selected as the new capital of Spain. Since then, royalty has built grand structures all over, giving the architecture a deep-rooted and proud style. The Hapsburgs and Bourbons allowed design and size flourish, and each century left its mark. While severely damaged in the civil war, the beauty of the city has been nurtured.

Madrid can be seen as the heart of Spain in more ways than one. The airport provides many flights to locations near and far, and the train systems can get to across the country in no time. Public transport is well-organised, so if you don’t wish to navigate the streets on your own by car (like me), seeing everything is certainly an option.

Despite being a bustling city, with green spaces like Buen Retiro Park, Casa del Campo and Campo del Moro Gardens, the Sabatini Gardens and the El Pardo forest bordering the city, you can sit back grab some space. 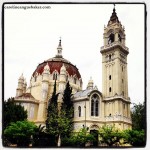 I’m not a big fan of crowds, so the streets of Madrid can feel like a mission in patience. On an average Saturday, walking the streets of central Madrid can be an absolute crush. Even in these times of recession, people are on the streets, shopping and eating. Frustration creeps in with every turn.

The weather – it’s not called nine months of winter and three months of hell for nothing. I’m not adept at inland living, and Madrid feels like a pressure cooker in summer, and the winter is biting cold which freezes the bones.

Madrileños are strong, proud people who know their own minds. It can feel easy to be written off as a no-nothing foreigner when in a group of locals. If you want to make friends, be prepared to need to work for it.

Madrid traffic can be a nightmare! Streets aren’t always well-labelled, and people just step out with an air of invincibility. If you want to drive to the coast for the weekend, the four hour drive will involve 45 minutes of swearing at lights just to leave the city.

There is no question that Madrid is the most expensive city in Spain. Buying or renting an apartment will make you cringe in fear, and what you get for your euro can leave a nasty taste in your mouth. From food, to schooling, healthcare, hotels – you name it, the price can certainly annoy.

Valencia and Madrid are incredible cities, vastly different to one another, and perfect for travellers and migrants to use as a guide of how different Spanish regions are.  As a tourist, both cities are a must-do. For those who love the bustle of the city, Madrid will delight, and those seeking relaxation will favour Valencia. For long-term Spain lovers, work would be the biggest issue, with jobs hard to come by in both cities. Study costs in depth before making a decision. They say you never forget your first love, and for me that is Valencia. The good outweighs the bad by a mile.

Caroline Angus Baker is a New Zealand author, specialising in Spanish history and politics. Her ‘Secrets of Spain’ novel series, set in Valencia and Madrid, is available now. For more on Valencia, plus book giveaways and free weekly reads, visit www.carolineangusbaker.com

Do you agree or disagree with Caroline’s thoughts? Where would you rather live? Post your comments and we will welcome other ideas too about where to live in Spain.

If you are thinking about the Malaga province or Costa del Sol, read the article HERE.

Read our thoughts about the best place to live in Spain HERE.