There are regularly new traffic laws in Spain. As the guardia civil (traffic police) are tightening their belts, many people are receiving unexpected traffic fines. Foreigners are often totally unaware that they are breaking any traffic laws until they are stopped and fined. (Read our old post on the Spanish Traffic Laws Lottery HERE)

In this post we are highlighting some points made in a recent article in El Pais, in English that we think you should be made aware of. Keeping you better informed will hopefully prevent you getting any unexpected and expensive surprises.

Please note that many of these laws are yet to come into force and it is advisable to keep an eye out for future updates. 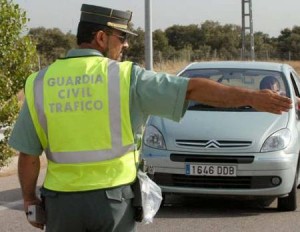 Congress on Thursday passed new traffic legislation that will affect how motorists and cyclists use Spain’s roads. While the law will not come into effect for some months – and some of the reforms still need to be specified by a new regulation code slated for approval in June – these are some of the biggest changes to keep in mind when driving or pedaling along Spanish roads in the future:

Keep an eye on your older children as it is you who will be held responsible and made to pay the fine!

1. Helmets mandatory in cities for cyclists under 16. After a long row over safety issues, the Popular Party has backtracked on its intention to make helmets mandatory for all riders within municipal limits. In the end, only minors will have to wear them. Not doing so could lead to fines of 200 euros for parents.

2. Small children may not ride in the front seat. Law enforcement officers will be able to stop and fine drivers carrying children under 1.35 meters in the front passenger seat, unless all the back seats are already taken up by other children also under the height limit (or the car has no back seats at all). Until now, under-12s could ride in the front as long as they had a booster seat or other approved retaining device. Taxis will have to follow the same rules, but parents, not taxi drivers, will be held accountable for violations. Fines can also reach 200 euros.

Spain appears to be moving closer to zero tolerance regarding drink driving. Basically, if you are going to have a drink, do not drive. Keep it simple! There are some great options now to employ drivers to drive your car back home for you …

3. Bigger fines for drunk driving. Driving with double the allowed limit of alcohol in the blood will now mean a fine of 1,000 euros rather than 500. Those caught driving under the influence twice within the same year will get slapped with a 2,000-euro fine the second time round.

As above, Don’t be stupid!

4. Fines for driving after taking drugs. The new law eliminates the need to prove that drug use influenced a person’s driving. Now, all it takes is a saliva test: if the result shows the presence of drugs in the body, drivers will be presented with a 1,000-euro fine regardless of whether the substances affected their driving or not. Prescription drugs are excluded.

Although, Nº5 may appear controversial, we kind of agree with it. Why should a drunk pedestrian need to cause an accident before they are penalised? Surely prevention is better than cure.

5. Alcohol and drug tests for pedestrians. Pedestrians caught violating a traffic regulation – by crossing the road at the wrong place, for instance – will be obliged to submit to a drug and alcohol test. Until now, this was only the case if they were involved in an accident.

Hmmm … how much money are they spending changing and re changing speed limit signs all over the country? As always, be vigilant and know the speeds on the roads that you use. Watch out for speed traps approaching roundabouts, where limits decrease rapidly…

6. New speed limits. While the current speed limit on highways and freeways is 120km/h, the reforms contemplate raising this to 130km/h. The new code scheduled for approval in June will determine where and when this speed may be legally reached. Penalties will be the same: starting at 100 euros for vehicles going up to 150km/h.

This one made us chuckle, images of unfit cyclists pedaling at full pelt to not break minimum speed limits!

7. No minimum speed restrictions for bicycles. This reform aims to solve a problem faced by cyclists in cities. Until now, vehicles could not travel at a speed below 50 percent of the limit. This was a problem for cyclists in spots such as Madrid’s Cuesta de la Vega, a steep slope where riders have a hard time going faster than 25km/h. Freeways remain off-limits to cyclists.

This one is still quite confusing. If in doubt, if you use a GPS device, deactivate speed trap warnings. As you know, if the law is not clear, it is you who will probable suffer …

Another update to keep any eye on … define “resident” in this case?

9. Foreign residents must register their vehicles. Because foreigners living in Spain were not under the obligation to register their cars here, in practice it was difficult to get them to pay traffic fines or submit to controls. The new regulations will determine the deadlines and conditions for vehicle registration.

10. Road works. It will be considered a serious offense to conduct any kind of road works without first informing the pertinent traffic authorities.

Finally, a fine for littering! How many times do you see people throwing rubbish out of their car windows and just wish somebody would stop them!

11. Road debris. Dropping items of any kind on the road will carry high penalties because of “the danger it poses to other road users.”

12. Inspecting driving schools. Hindering health department or traffic inspectors trying to carry out checks on driving schools and other vehicle-related centers will be considered an offense.

This next point (Nº13)  highlights the need to ensure all your paperwork is up to date. If you have not advised Traffico of your change of address, you will not receive traffic fines as they are issued. If you don’t pay them quickly, they grow. Be warned, they grow very quickly and you are totally responsible for them. It is not the authorities responsibility to inform you that you have outstanding fines. it is your job to find out. If you are uncertain about this, check now! Time is money in this case.

14. Drivers to be responsible in accidents involving game animals.Until now, such accidents were only blamed on drivers if they were in violation of the rules of the road, otherwise the state or the owner of the hunting preserve were held accountable. Under the new law, drivers will always be considered to blame unless it can be proven that the animal stormed the road as a result of a big-game hunt held that day or within 12 hours of one having taken place. The state will only be accountable if it fails to provide proper warning signals or to mend broken fences. In practice what this means is that no compensation will be handed out in the event of a driver being killed or seriously injured after a collision with an animal on one of Spain’s nearly 25,000 hunting preserves.

Good discounts for quick payment! If you are going to contest a fine, it is often advisable to pay it first (at the discounted rate) and then submit your complaint. That way, if you lose, you have at least halved your fine.

15. 50 percent discount for early fine payment extended to 20 days. This is up from the current 15 days.

Keep an eye out for update related to Nº16 …

16. Environmental restrictions. Vehicles may be barred from entering certain roadways based on environmental criteria. The Environment Ministry will establish the exact rules governing this point.

18. Ban on taking unsafe vehicles to other countries. This article is an application of the United Nations’ Global Plan for the Decade of Action for Road Safety 2011-2020, which aims to discourage the importing and exporting of new or used vehicles deemed unsafe.

19. Priority for tow trucks. Tow trucks on their way to assist motorists will have right of way and have to be treated the same way as ambulances.

20. Fewer driving restrictions for cancer patients. Right now cancer sufferers are hardly ever allowed to drive, unless their doctor takes it up with the traffic authority. But improved medical treatment is set to be reflected in the new road rules, which will place fewer restrictions on patients.

So there you have it, our comments regarding updates to the recent new traffic laws in Spain. If you have any doubts, don’t hesitate to get in touch!