Living in Barcelona with Children: An Interview with Justine Ancheta 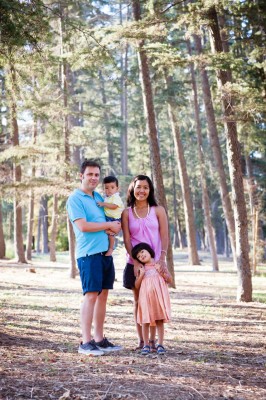 Justine and her family.

Hello! I’m Justine, and I’m a US citizen from California. I met my husband when I was living in Seville in 2003, which is where he is originally from. We got married in 2008 and lived together in Barcelona. Both of our children, ages 2 and 5, were born here in the city.

What were your main concerns / worries before moving to Spain?

I spoke Spanish very well. My worries began when I first got pregnant in Spain, thinking about giving birth in a Spanish hospital. I was concerned nobody would understand me culturally and emotionally, and I wouldn’t have anybody to help me raise my baby. Luckily, my parents and my husband’s parents were with us the first month, so we were able to get some help cooking and cleaning our home.

What research did you carry out before deciding to move?

Since my children were born in Barcelona, I knew a few expat mothers who had already been through the process of raising their children in a multilingual and multicultural environment. I asked lots of questions! I also joined a online group of parents in Barcelona called Barcelona Tots. It’s very active, and you can ask anything, such as language issues, recommendations for dentists, day excursions with the kids, etc. Just being able to find people online who have “been there, done that” was a great help. The Internet is truly a goldmine!

During the move and now …

Let’s talk about the experiences at school / nursery … How did you decide which school to send your children to? Any tales / stories to share? Any tips for other mums about selecting schools

When I first started to think about nursery for my daughter, I was very stressed out. The mentality of sending children to nursery here seems to be that nursery is not just a place where a caring guardian can watch your children while you work. Spanish people seem to truly treat it like school, and they often call it that — “cole”. They also feel that it’s very important that very young children socialise at an early age (such as 12 months old) because it’s good for them. I got lots of pressure and opinions about it.

I ended up deciding to put my daughter in an international, multilingual part-time playgroup when she was two years old. This was the best decision I made for my family. Not only did it ease me into the Spanish education system, but we also made some very valuable friendships with other families at the playgroup. These friends have been an expat support group. Any expat experience has its challenges, but when you’re an expat mother, it gets even more complicated. I especially need friends who completely understand my feelings of being in between two countries.

Integration: What steps have you taken? Has it been hard/easy? Any general comments about the people where you live?

To integrate into the Catalan culture, we decided to incorporate our children into the public education system. Our daughter goes to a concertada school (half-private, half-public). It’s much less expensive that private schooling of course, and also I think it’s healthier and easier that our children have friends in our neighborhood. They are also growing up trilingual, which is a huge plus. Luckily, we got our daughter into the school of our choice, and we couldn’t be happier. Our son will go there next year.

Getting to know Catalans has been a challenge. But I think it’s normal for any culture. When I was single and living in Seville, it was easier to make local friends, but I had the time, and my lifestyle was different. Now, I find myself trying to make friends with the mothers at school. Friendships take time. I don’t know if I’ll ever find a Catalan BFF, but just getting to know parents at school is a start!

In general, I find the Catalan people to be open to other people and cultures because there’s so much diversity. I find they’re often misunderstood by other Spaniards as being cold or lofty. That’s not my experience.

We don’t live in the center, so our neighborhood is family-oriented. We’ve also been lucky to have outstanding neighbors. This lovely elderly couple has watched my children while I ran important errands, one of them quite often. They’re practically family. They know how hard it is to take care of two little ones since essentially we don’t have any relatives nearby. They’re truly invaluable.

How is your Spanish? What are you doing about it?

I’ve been learning Spanish for over 20 years, and my husband is Spanish, so it’s advanced. I will never be a true bilingual. I would have a hard time writing an academic paper, but I can have a decent conversation in Spanish.

What do you do for a living? How do you support your family in Spain?

I’m teaching English at the moment. Most of the hours available for teaching are after school or weekends, and I value that time as family time.  Currently, I’m looking to expand my career into marketing, writing, and/or editing. So if you know of any opportunities, let me know!

If you had the chance to do it again, would you do anything differently?

I can’t think of anything that I could change. There are natural challenges of living abroad, but they were bound to happen. I’m happy where I’m at! I feel like I’ve learned and grown ever since living here.

What advice would you give to anyone thinking of moving to Spain with children?

It’s a great opportunity to raise your child in a multilingual environment. Plus, it’s probably more acceptable to be out with your children late in the evening, which I think is great! The kids here seem healthy, happy, and safe.

A native Californian, Justine began her adventure as an exchange student in Seville, Spain. She realized her real adventure started when she came back as a resident and started raising a family in Barcelona. But she’s up to the challenge because she can’t get enough of this stunning city.

All the information you need can be found in our newly published book, available here …

Remember to CLICK HERE TO SUBSCRIBE to our YouTube channel to receive new videos and interviews about Moving to Spain with Children, as they are released.