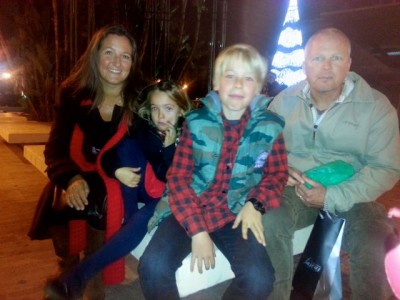 What child wouldn’t love the fact that we get to celebrate, not once, nor twice, but three times, during the festive period here in Spain? (And that isn’t counting New Year celebrations!)

When our children were born, we felt it was important to return to the UK for Christmas once every two years, so that the children could celebrate it with our families. However, we didn’t want them to think that Christmas had to be spent in the UK to be fun. Luckily, in recent years, Spain has embraced more Christmas traditions so it is easier for us to make it fun for the children.

This year we should have gone back to the UK and yet we opted to stay home. Our home is here.

So, what are our usual Christmas in Spain traditions:

On Christmas Eve, we enjoy our own Spanish-style Christmas. We always buy a full 5 to 6kg Serrano ham which is sliced and served until there is almost nothing left on the bone. (See our Sopa de Picadillo recipe, one of our children’s favourites,  where we use the leftover bone to make stock for this scrummy soup).

We also have typical cold cuts such as salami, cured pork, chorizo, cheeses, olives and pickles. This is washed down with a good red wine, usually a Ribera de Duero, and sometimes finished off with an anis (sweet aniseed liquor). (The alcohol is served only to the adults of course 😉 ) 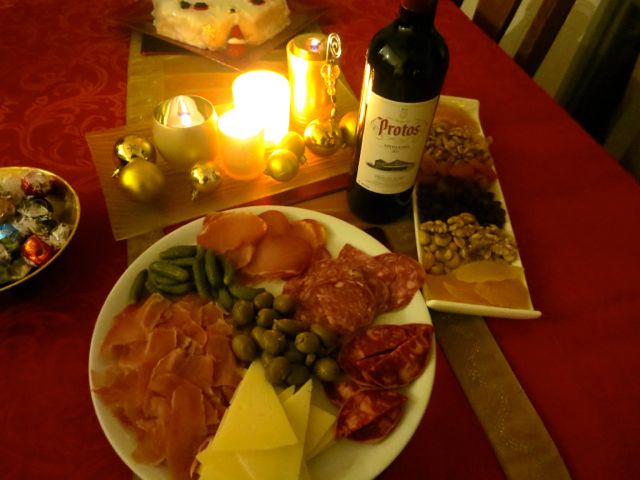 In previous years the children opened one present on Christmas Eve, as is traditional with some Spanish children. However, this year we have added a new Family in Spain Christmas tradition.

This year we’ve prepared a special Christmas Eve box for them, as a gift from Nana. This year the box contained a pair of pyjamas, some socks, chocolates, a Christmas mug with a selection of hot chocolate drinks and a book. They loved it! 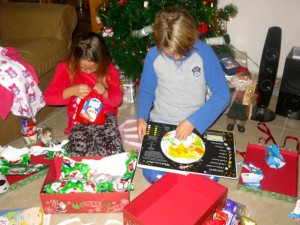 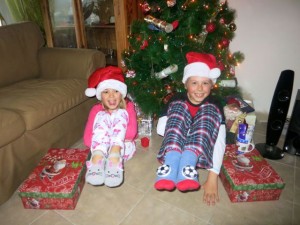 All ready for bed …

This is our way of spreading out the gifts and helping the children to appreciate each gift they receive.

I really feel that children are too often inundated with too many presents that the true appreciation of the presents is difficult to control. As long as there is still another present to open, the opened gifts are not of so much interest. It’s like a race to the finish line …

Ready. Steady. Go. Do not stop until the last gift is opened. You never know what is in that last box … the last box is the focus.

Back to our usual Christmas in Spain traditions:

On Christmas morning, we have a family stocking that we open together. These are fun gifts that Santa brings the children and the parents 😉

We enjoy a cooked breakfast with a glass off Bucks Fizz , then I’ll spend most of the morning cooking a traditional roast meal followed by mince pies, pudding or christmas cake. The main meal is almost always  a turkey with all of the trimmings. For our Christmas dinner ideas I usually rely on Jamie Oliver magazines. We are lucky where we live as the foreign supermarkets over here, such as Iceland,  stock most typically British festive ingredients, although I often have to improvise.

After our main meal we distribute the presents from beneath the tree. These are a mixture from overseas family members and Santa 😉

This year we spent lots of time making things for the festive season. We will share our recipes for homemade: mince pies, christmas cake, ginger biscuits, chocolates, truffles and lots of decorations. 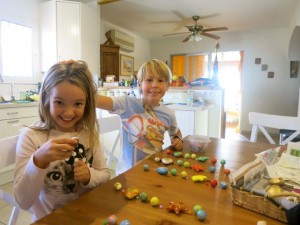 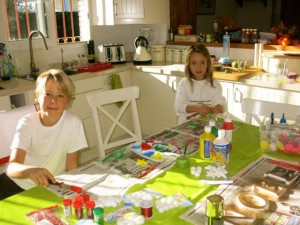 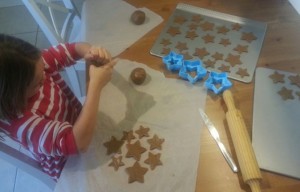 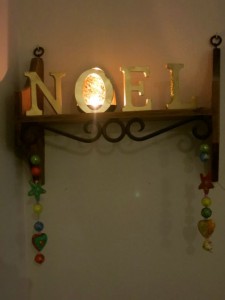 As Spain is a catholic country, the nativity is a very important part of the celebration of Christmas. We always make time to visit them wherever we are. We did get a shock once when we came across a Barbie and Ken nativity scene: Barbie was belly dancing for Ken who was sat in an arm chair drinking beer. It wasn’t quite the earnest religious moment we were expecting! It was challenging, to say the least, trying to explain the alternative interpretation of the religious nativity scene to our children who appeared quite shocked at scantily clad dolls and men with drinks in their hand… 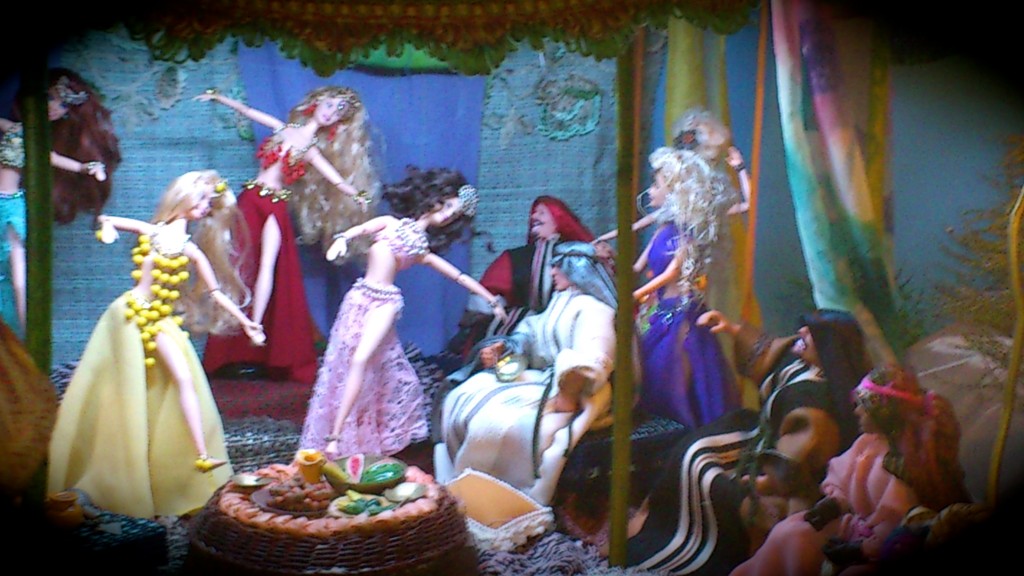 The Ten-tacion Belen in Malaga plaza!

This year, 2015, Malaga surpassed itself. The nativity scenes and festive lights were amazing. People flocked from far and wide to see them. 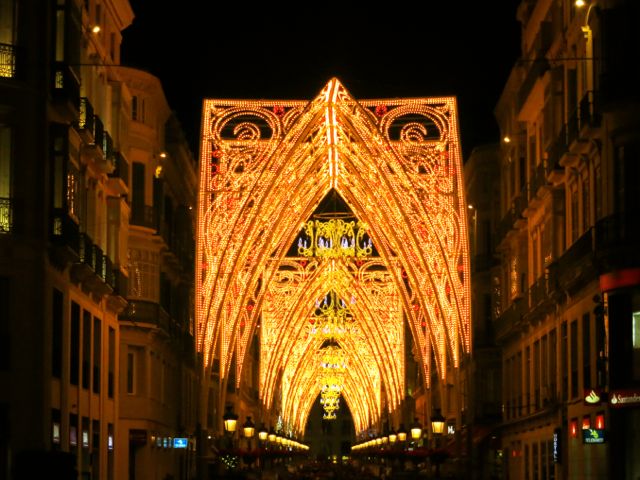 The stunning lights in Malaga Capital

We also love the Panto season. When we are in the UK, with my husband’s family, we go to High Wycombe with all the cousins. When we stay in Spain we go to Malaga Capital. Last year we enjoyed a show by Cirque du Soleil in Malaga and this year we went to see Pinocchio performed at the Cervantes Theatre in Malaga Capital. It was magical.

One of the most memorable Christmas pantos we saw, in Spanish, was the Wizard of Oz. During the show, the lion spontaneously broke out singing Spanish flamenco (the traditional Spanish custom style of singing) and proceeded to skip down the yellow brick road, in full voice, with Dorothy, the scarecrow and the tin man!

Keeping the belief in Santa alive:

As the children grow older it is sometimes a challenge to keep the story of “Santa” alive. Is it important? I don’t know but I just imagine the discovery that he doesn’t really exist would be quite a blow to a child.

As a result, I’m always looking for fun activities to keep the Santa Claus story alive. Wherever we are, the children leave a note for Santa and their stockings on the chimney. A plate with a carrot for Rudolph, a mince pie and a glass of PX sherry for Santa sits by the chimney too. 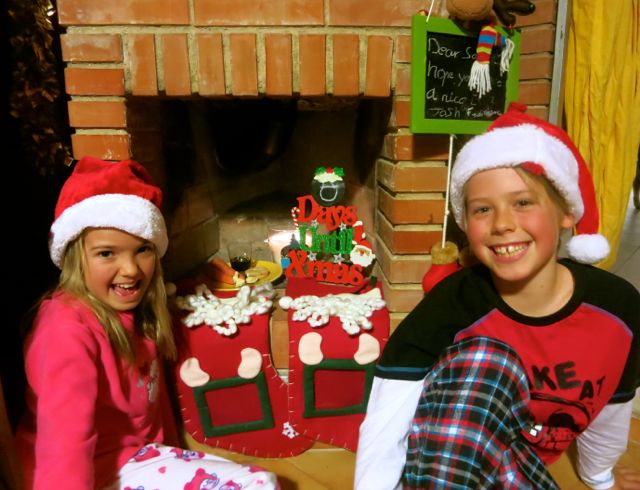 Setting the fireplace for Santa …

I always order the PNP santa message to be delivered to the children, adding an upto date photograph and something personal that not many people would know.

The ability to track Santa online nowadays also makes his existence more of a possibility for Joshua, our 10 year old. We often discuss how it is possible to deliver so many presents to so many children in so many places.

And then come the Three Kings (Los Reyes Magos):

We then celebrate again on the 5th and 6th of January, which is called Los Reyes Magos (Three Kings). This the day that Spanish children most look forward to during the festive season. This evening “Los Reyes Magos” will deliver them either gifts or coal, depending if they have been good or not.

On the evening of January 5th, we head up to the village, Mijas Pueblo, to:

It’s all fun and it’s all part our our Family Life in Spain.

This year was extra special for us as our son, Joshua, was on one of the floats with the village football team. 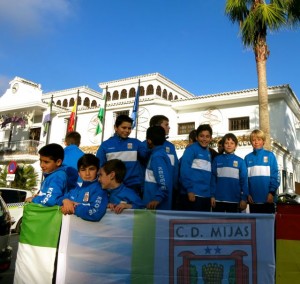 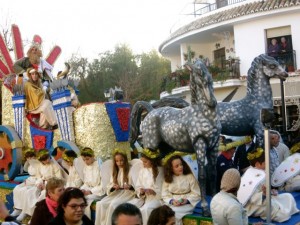 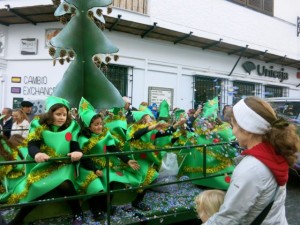 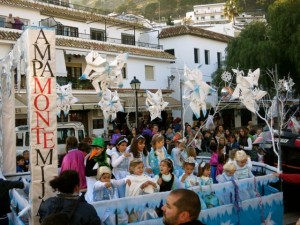 And last but not least, on the 6th of January, whilst most Spanish children are finally enjoying their gifts, we are taking down our decorations and getting ready to start an exciting new year. We do however enjoy a Roscón de Reyes ( a traditional Spanish cake filled with fresh cream). This year we had not one but two lucky charms inside. We are taking this as a sign 😉 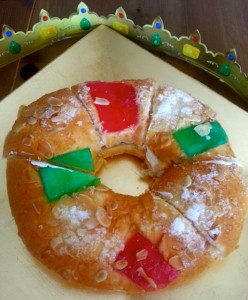 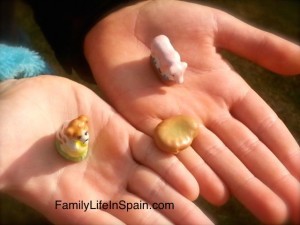 The children love the festive season here in Spain because they get to enjoy the best of all of the traditions.

It’s not quite the same  as back in the UK, but it’s our version of Christmas and we really rather like spending Christmas in Spain !

Here’s to getting back to normality after almost 3 weeks of festivities … 2014 was a great year and we are excited to see what 2015 has in store.