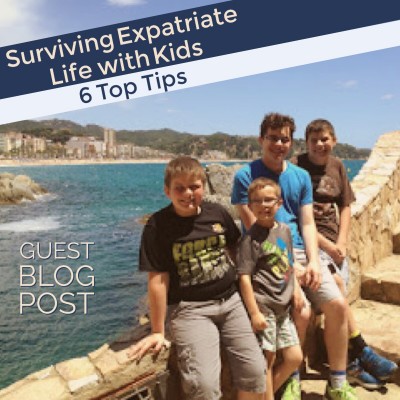 I love how many people we virtually “meet” on social media. It really does make the world a smaller place and enable us to exchange stories and ideas with like-minded people.

BG Smith leads study abroad programs for his university in Spain, and on the side, produces videos and blogs on surviving expat life with a family of 6. For more insight and adventures, subscribe to his YouTube Channel Expatriate Snippets and follow the Expatriate Smiths blog.

Over to you Brian …

We’ve often been asked what it’s like to bring a family of 6 to Europe–usually following an indirect inquiry about our sanity. So I thought it might be apropos to pen this blog post with the top six considerations of traveling and living in Europe.

1. Be Flexible with Your Living Conditions

Across the board, living spaces in Europe are generally much smaller than they are in the U.S. Apartments tend to be two bedrooms or less, and we have learned to fit all four of our kids in the same bedroom, using bunk beds, or putting some kids on a couch if necessary. Hotels may be a good alternative, but even they are much smaller than in the U.S. Shortly into our first expatriate experience, we finally gave up on finding an American-size hotel room that fit us all, and looked for multi-room bookings that were cheap enough to “vale la pena” (as they say in Spain). While Booking.com seems to be a good resource for European hotels and homes, we have also had varying success with Ibis hotels. Their rooms are extremely small and basic (usually a bed, bathroom, shower all in 100 sq ft), but they’re also extremely economical. 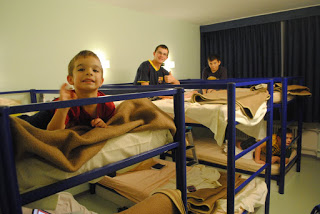 After traveling to so many countries, and living for long periods of time especially in Barcelona, we often have friends who ask for restaurant recommendations. Problem is, we don’t go to any restaurants. I mean…we don’t even go to restaurants in the U.S.–we have 4 kids. Not only is it pricey, but “Smith, Party of 6” isn’t always the most relaxing dining experience. No, we don’t do restaurants in Europe, especially since in many cities, the dining experience can be much longer (up to 2 hours or more). Instead, we do “Grocery Stores”. Yep, Grocery Stores. Especially Aldi, Lidl, and Mercadona. WE also do outdoor markets. I’m a firm believer that you learn a culture by its home-cooked meals, and grocery stores are the ground floor. We love to dive into the new and different foods, and we often let the kids choose what they want. Of course, some grocery stores are more difficult than others, esp. Croatia where we didn’t have the advantage of an easily translatable romance language, and the Croatian Kuna has an uneven exchange rate against the euro and dollar. Either way, though, we’ve found that you can get the same, and sometimes better, food in grocery stores than restaurants, and it’s always cheaper.   (Below, some favorite grocery foods in Italy and Spain) 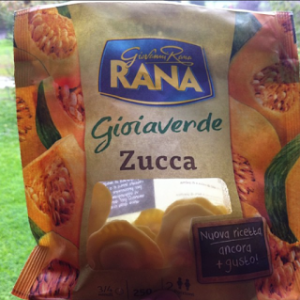 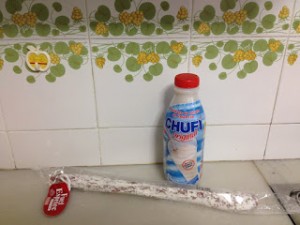 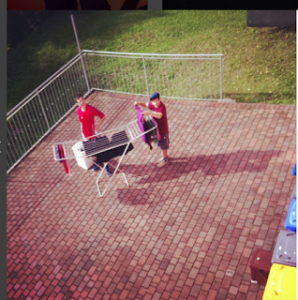 3. Level Up on Going Green

From meticulously dividing garbage into up to four different categories and putting out the right receptacles on the right day in Italy to paying for utilities in HomeAway and AirBnB rentals,  life in Europe can be much more conservation-minded than life in the U.S. Europeans like to save energy and live green. The value of conservation may even carry over to laundry, as few apartments in the places where we’ve lived (Spain and Italy) have had a dryer; and washing machines in Europe take 2-3 times longer than U.S. counterparts (up to 3 hours for a load to finish). But one thing we’ve learned, is that welcoming the change in lifestyle is actually something our kids have enjoyed–in fact, in Italy, hanging the laundry out became one of the coveted chores.

4. Hang with the Locals 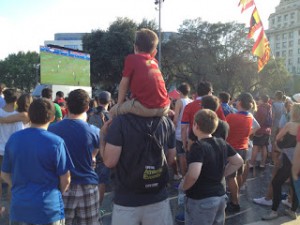 One of the most significant opportunities to grow has been interacting with locals while we’re abroad. It’s a chance for all of us (not just the children) to see from another’s viewpoint and thereby broaden perspectives. For this reason, I always encourage my boys to jump into a futbol (i.e. soccer) game with local kids at a park. Whether it’s been France, Spain, or Italy, the kids have always figured out how to work around the language differences–playing seems to have a language all its own.

We have also religiously attended our church services on Sundays, no matter where we are. This has often meant staying for 2-3 hours of church services, depending on our travel schedule, even when we may not speak the same language as the congregation. In Spain, my fluency in Spanish has made it easier, but the more we’ve gone to Church, the more the kids figure out how to communicate and get around the language barrier, to the point that the oldest have often said they don’t need me to translate for them, even though they don’t speak Spanish.

Despite what travel gurus like Rick Steves preach, the Euro Rail System is NOT inexpensive or frugal, especially with a family of 6. Inexpensive flights can be a good alternative–even commonly derided cheap airlines like RyanAir aren’t as bad as billed, as long as you know the conditions/specifics of traveling with them. (EasyJet is particularly constricting on their carry-on baggage policies).  If booking a flight, don’t fall into the “you can book flights once you get here” trap…it’s best to plan ahead, as Euro flights, just like US flights, are much cheaper a month or two before your travel date.

A good alternative is rental cars. Yes, they can be somewhat expensive (up to $100 a day) but renting from a carrier in an airport is cheaper, and car prices vary by country. Generally, we found them to be more expensive in the UK, and extremely cheap in Spain ($50 for an entire weekend for a car that fits 7).  If you book online early enough, they can be the cheapest option for travel. Of course, if you drive, tolls and gas are worth examining (especially in France and Spain), but Michelin has a great website for figuring out travel costs. 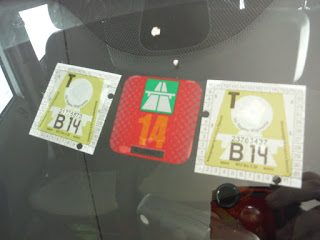 A few travel laws you’ll need to keep in mind if you drive in Europe: 1) If you’re renting in Switzerland, Austria, or Slovenia, make sure you get a highway “vignette” sticker, or you’ll be slapped with a huge fine; 2) You will get caught speeding…by a camera. There are a ton in Europe. On the bright side though, the average speed highways can be fun (esp. in Italy where people driving sports cars sit on the side of the road for a few minutes just so they can push 120 MPH).  3) Make sure you follow traffic signs, especially the zone traffic limitato signs. Risking it just because you don’t see a cop will lead to a steep fine (like I found out in Padova). There are cameras everywhere.

An important side-note on Europe travel is how walkable cities are. It’s a blessing and a curse. Driving in large cities is difficult, and often forbidden (esp. in Italy), but it also means that everything is fairly close (or at least a 15-20 minute walk). Bonus: It’s also the most enjoyable exercise in the world–amazing sites and cardio at the same time. It also means a lot more walking for kids who are used to taking a car everywhere. At least a month prior to our trips to Europe, we like to take long walks around our home in the U.S. to get them ready for the “Euro-Cardio”. Also, we’ve found it essential to always bring water bottles when we go sight-seeing, whether it’s hot or cold. Some  cities, even major ones (I’m looking at you Paris), have no public drinking fountains. Having a water bottle has not only saved us a few Euro, but it’s also saved us a ton of frustration when kids get thirsty. (BTW, Barcelona is the overwhelming exception here, as there are fountains all over the city).

While we try to avoid the American tourist experience as much as possible, we also believe that sight-seeing can be both exciting and educational. In fact, we tend to see everything we can in an area (sometimes more than locals see).  Of course, sight-seeing with 4 boys can be difficult, especially when museum-meandering and architecture-admiring usually isn’t on the top of their list. So, to engage them more, we invite our kids to choose a country, city, or location, and do the research about the area themselves, choosing where to go, what to see, and why to see it and put together a powerpoint presentation about it. This usually includes guided Internet research and at least one trip to the library (bonus).  We then reserve a night when they can officially present the idea to us, and when we visit the location, the child in charge gets to be the official tour guide, leading the visit, and talking about interesting historical, cultural, or other significant facts about the location.

Most recently, this led to a weekend road trip around Catalunya, to the Roman ruins of Tarragona and the beach castles of Lloret de Mar and Tossa de Mar.

Another thing we’ve found that works with endless sightseeing is to give the kids a travel journal, where they can draw some of the cool places we visit. 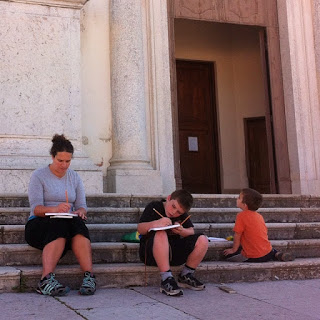 To be fair, sometimes living abroad has to involve the usual video-game playing and TV watching downtime for the kids, despite how much we, as adults, would rather spend every moment taking in the beauty of the culture around us. However, we’ve discovered it’s a balance thing…downtime makes the sight-seeing easier to do and the kids more amenable to the activities. Not to mention, downtime can be a great motivator, especially when visiting cities where there’s a lot of walking.

Overall, expatriate life requires flexibility and, to be honest, isn’t for everyone. Setting expectations, however, is the first step in ensuring a good experience for both parents and kids.

Do you have any Tips for Surviving Expatriate Life with Kids? Do share them with us 🙂