About Fiestas and Siestas Miles Apart, By Alan Cuthbertson 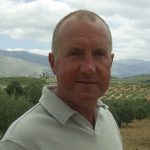 Fiestas and Siestas Miles Apart is the humorous but true story of what happens when the Cuthbertson family decides to sell everything (including the family business), load the family car, and move from England to Spain.

As author Alan Cuthbertson and wife, Heather, begin their move, daughters Ashlie and Stacey have other ideas and take off on their own adventure to Thailand, Australia, and New Zealand. The girls swim with sharks and work in a gold mine, their enthusiasm and naivety shown in the e-mails and texts received by their parents, who themselves are finding Spanish life a very steep learning curve. Who knew fried sparrow was a delicacy? And Alan’s first hunting trip is not a completely successful expedition, but a very funny one. 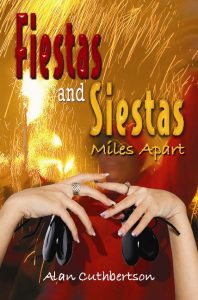 We are giving away 3x copies of Fiestas and Siestas Miles Apart in Kindle format and 3 copies in audio format.

For a chance to win answer the following question.

What did Heather pull from her mouth?

(The answer can be found in the excerpt below)

Fiestas and Siestas Miles Apart can be purchased from Amazon.

Antonio and Encarna are good friends from our village. Antonio is referred to as Lee Van Cleef, getting the nickname after I pointed out his similarity to the spaghetti western star

A couple of days later we sat with Van Cleef and his wife Encarna and the conversation got onto the subject of food once again. “Rabbit is my favourite,” confessed Van Cleef.

“Mi casa, Domingo próximo.” Van Cleef’s invitation to Sunday dinner will have been the first time we have eaten with a proper Spanish family in their own home. It was something we looked forward to with mixed emotions.

Not knowing Spanish etiquette for such an occasion, we dressed casually and before leaving the house, selected a bottle of wine to take. “I’ve just remembered. Encarna doesn’t drink and Van Cleef only drinks whiskey,” said Heather, so I swapped the bottle of wine for one of whiskey.

During the short walk to their house, Heather and I mulled over the possible menu.

“He said it was going to be rabbit,” I pointed out.

“I’m just thinking back to the bar when they were all eating sparrows and snails,” Heather said nervously, her nose curling a little.

“We have to eat whatever they put in front of us,” I said, “it would be rude not to.”

We knocked on the door and were greeted by Van Cleef himself. I passed him the bottle of whiskey. He looked at me, then the bottle, then back at me. His expression said, “You have a drink problem my friend.” Inside the house it was quite dark, as most Spanish houses are. Alfonso, Van Cleef’s son, was engrossed in a cartoon on the TV and seemed to be finding it hysterical, a little unusual when you consider he is 19 years old.

We took our positions at the table and right on cue in walked Encarna carrying individual plates full of assorted vegetables and…animal. Heather and I glanced at each other recalling our vow to eat, or at least try, whatever was put in front of us.

Now I know this was to be Heather’s first taste of rabbit, but I just don’t ever remember seeing a rabbit with wings, so presumably some kind of last minute substitution had been made. We all picked up our knives and forks and began to dig in. Encarna saw me pushing the meat around, got up and disappeared in to the kitchen. When she returned she passed me a pair of scissors. “What the hell are these for?” I whispered to Heather. Across the table from me, Alfonso had rejected the knife and fork and was pulling the animal on his plate apart with his fingers, so I did likewise. The wing looked tempting, so I gave it a tug. It came away from the body. Unfortunately, where it had been joined hung the veins and tendons, still dripping with blood and bodily fluids.

“Antonio, no conejo?” Not rabbit? I asked.

“No,” he replied. He then stood up, hooked his thumbs under his armpits and waved his elbows up and down. From this I deduced he was either trying to tell me we were eating bird, or we had progressed on to charades and this was his Dick Van Dyke in Mary Poppins.

Heather, who had been sitting at the side of me throughout the meal, let out a faint squeal that fortunately only I heard. As I turned my head I saw her pulling something from her mouth. Was it a bone? A bit of gristle maybe? Or even a filling? No, it was a piece of buck shot the size of a small rock. “I guess he shot it himself,” I said.

After the main course, a bowl of fruit was brought from the kitchen, and Heather selected a pear and took her first bite. “No, No,” called Encarna thrusting a knife toward Heather.

“I think she wanted the pear,” I said a little worried. As it transpires, the knife was to peel the pear, as they never eat the skins of fruits concerned about what they may have been sprayed with.

As we said our goodbyes I returned the invitation and promised that next time they would have to come to our house for a meal. Van Cleef turned his nose up and curled his top lip. A rough translation of what he said would be. “I don’t think so; I don’t eat that English muck.”

Send your answer to:  cuthbertsons@hotmail.com